KEW Foundries has completed a deal with Gunric Valves for the supply of body and disc castings for a large order of valves destined for Saudi Arabia. Previously known as Kimberley Engineering Works (KEW), KEW Foundries is South Africa’s oldest foundry and engineering works. 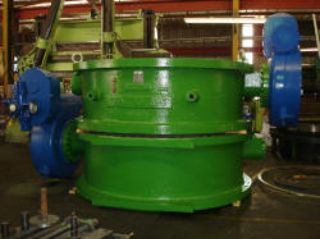 According to Mark Wilson, Marketing Director, Gunric Valves, the large order of valves will be installed and commissioned at a desalination plant in the Yanbu petrochemical complex in Saudi Arabia.

“We selected KEW Foundries to supply us with the castings for the various valves because we have a well established business relationship with them and have always held their products, quality, and service delivery in high regard,” says Wilson.

“Due to the large size of the castings, KEW Foundries is one of the few foundries in the country that can successfully provide the castings to suit those requirements.”

John Bryson, Foundry Director, KEW Foundries, says this was the largest job undertaken by the company since its inception in 1891. “In response to market demand, we have been gearing up to accommodate castings of this size. We improved our team by adding a dedicated foundry manager, Casper Blignaut, and have been working towards this vision for the past two years,” says Bryson. 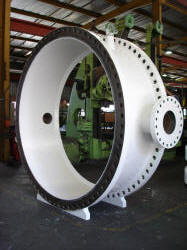 “Many companies in the industry are looking to overseas suppliers to provide these large grey and SG iron castings, which is costly and can take a long time from design to shipping. By completing this deal successfully, we have demonstrated our capabilities, as well as our focus on the client relationship and have provided an excellent platform from which to continue.

“We are a hands-on team and work closely with our customers right from the design stage to ensure that the job is completed according to specifications. In addition, we have a fleet of trucks, including a low bed that is capable of transporting the larger and heavier castings. This saves the customer time and money in hiring transport contractors, especially in regard to the new road regulations,” says Bryson.

New patterns for the 84 and 72 inch check valves and 96 inch butterfly valves were developed, while existing patterns were used for the 72 inch butterfly valve. Extensive care was taken to ensure that castings were designed and manufactured according to international quality and safety specifications, as well as project specifications in order to comply with the process and service conditions. This involved close co-operation between Gunric Valves’ and KEW Foundries’ technical staff, as well as the pattern makers.

The design of the valves themselves features metal to metal sealing which guarantees a longer seal life, bubble tight sealing and a wide temperature and pressure range.

Wilson concludes that Gunric has received two more orders for the smaller butterfly valves and the project should be completed towards the end of 2008.