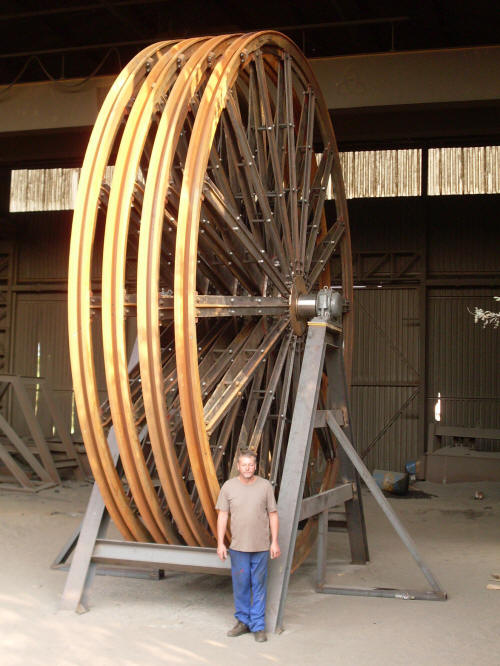 “The sheave wheels, presently in use, were imported and feature a welded assembly. The welded assembly has become problematic, as the welds are developing stress cracks during normal operation. To perform repairs, a technician needs to climb up into the headgear, inspect and re-weld the sheave wheel assembly welds. This has resulted in unacceptable amounts of downtime for the business unit.”

KEW Foundries has designed a solution which features an eighty percent cast iron construction. The hubs and rims will be cast in Grey Cast iron, while steel will be used to manufacture the spokes of the wheel. KEW Foundries’ design does not incorporate any welds into its assembly. Rather, all mating parts will be assembled using a bolted construction method. This eliminates the possibility of stress cracks developing, and results in a superior product which will help ensure that the mine experiences no unplanned downtime, resulting from sheave assembly maintenance.

Goncalves explains the benefits of this design, “The current sheave wheels feature an internal bearing assembly. This solution is acceptable while the bearings are functioning properly. However, once a bearing fails, the entire cluster assembly needs to be stripped to repair a single bearing. The mine has reported excessive downtime as a result of a failed bearing. Our design features sheave wheels mounted on phosphor bronze bushes and external bearing assemblies. In the event of a bearing failure the bearing can be accessed directly. However, as long as the bushes are greased and the bearing inspected annually, this design will negate any down time.”

KEW Foundries provides total cast solutions to its clients. The company’s technical team has more than 100 years combined experience in designing cost-effective winding solutions either independently, or working together with clients to achieve solutions which meet the requirements of the mining industry under the most demanding conditions.