KEW Foundries has just delivered eight kibble and stage sheave wheels in fulfilment of a contract worth R1.2 million, awarded by Frontier S.p.r.l, a wholly-owned subsidiary of First Quantum Minerals Limited. The wheels were destined for Frontier mine in the Democratic Republic of Congo. 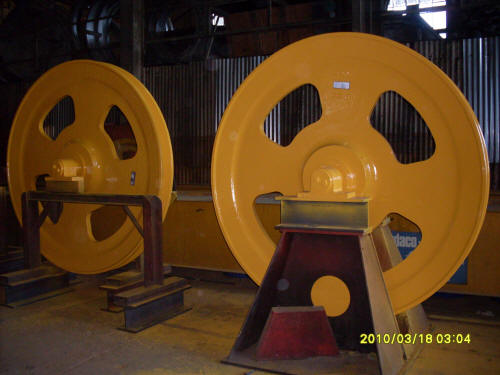 KEW Foundries manufactured eight kibble and stage sheave wheels, destined for Frontier mine in the Democratic Republic of Congo.

“It is our first contract for the First Quantum Minerals Group, whose operational headquarters are based in Perth, Australia. They were referred to us by a local project engineering company. KEW Foundries had to compete with several Australian companies to secure this deal. Our ability to adhere to the strict delivery timeline and our competitive pricing assured us the contract,” says Jaime Goncalves, Technical Director, KEW Foundries.

The one off kibble wheel, with a diameter of 3.048 metres, three stage wheels with diameters of 1,830 metres each and the four 800mm diameter stage wheels were manufactured within parameters supplied by the client, but according to KEW Foundries’ own design.

“The kibble sheave wheel is manufactured as a bolted design, with the rim and the hub being manufactured in halves and cast in grey cast iron in our foundry. The spokes are manufactured in 350WA steel and all the connections are bolted together, using high strength fitted bolts manufactured from 709M40 steel. The spoke-to-rim and the spoke-to-hub connection faces are machined to ensure a close fit between the components. In this manner, the bolts experience minimal shear forces. The stage sheave wheels were all cast solid in grey cast iron. All the equipment was 100% magnetic particle inspected (MPI) and ultrasonically tested (UT) by a third party inspector and witnessed by the client’s representative. This is a standard operating procedure that we apply to our complete sheave wheel product range,” says Goncalves. 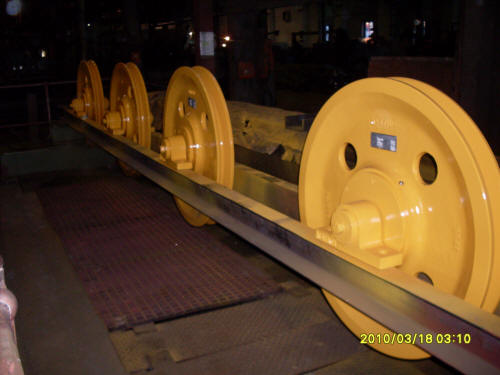 The eight sheave wheels were delivered on time to the transporting agent in Gauteng in mid-March 2010.