KEW Foundries is currently involved in a ground breaking crime fighting initiative in the Northern Cape – namely the melting down of knives commonly used in violent crime. The project is an extension of KEW Foundries’ continuing involvement in the destruction of firearms.

“Crime is not the sole responsibility of the police,” says Kumar Anoop, Managing Director, KEW Foundries. “Rather, it is the duty of every South African citizen to take a formal stance against crime and implement measures, however small they may be, to help alleviate the problem.” 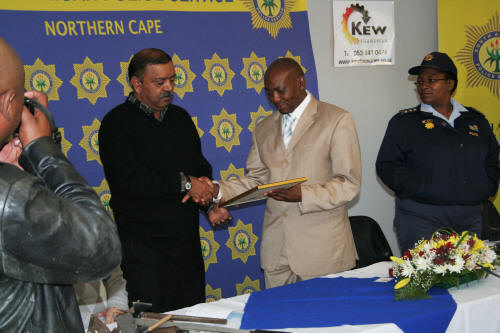 KEW Foundries became involved in the project after being approached by the police to assist in the destruction of dangerous weapons confiscated in schools and stop and search activities. “It is a misconception that confiscated weapons end up in police storage, only to be stolen and put back on the streets. We have been melting firearms on an average of three times a year. Typically we destroy over two tonnes of firearms at a time,” explains Anoop.

Following the success of the firearm destruction project, KEW Foundries was approached by the South African Police Services to use its facilities to extend this endeavour to include confiscated knives. At inception, KEW Foundries destroyed over 10 500 knives in its furnace, which was heated to 1 450˚C. The company will continue to assist the police in this initiative wherever possible.

Anoop explains, “We will support the police in every way possible. If necessary, KEW Foundries will fire up its forges on a daily basis to assist in the fight against crime. Melting down 10 500 knives is really just the tip of the iceberg. When you consider that the majority of these knives are being confiscated from school children and people who are carrying them on the street, it becomes a matter of principle to get involved.” 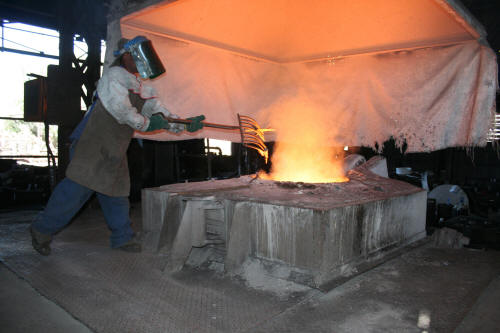 A KEW Foundries employee hurls knives into a furnace heated to 1450˚C,
ensuring that the weapons will never be used for ill intent.

There are currently plans being implemented to deal with knives confiscated from regions outside of the Northern Cape. After the knives are melted, the recovered metal is analysed and then directed to a purpose for which it is suited.